A new report assesses how the nation fared against the ambitious challenge goal set by the American Cancer Society to reduce the cancer death rates by 50% over 25 years ending in 2015.  The report finds areas where progress was substantial, and others where it was not. The report, appearing in the American Cancer Society journal, CA: A Cancer Journal for Clinicians, says the best improvements were seen in cancers for which prevention, early detection, and treatment tools are available, including cancers of the lung, colon, breast, and prostate.  How much more progress will be made going forward will depend on how well policy makers and the American public work together to continue progress in those areas, and in making the best available care accessible to all. 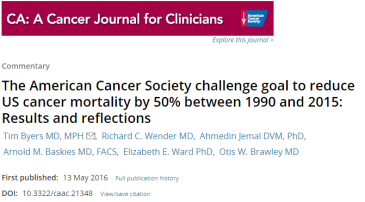 In 1996, the Board of Directors of the American Cancer Society challenged the United States to reduce what looked to be peak cancer mortality in 1990 by 50% by the year 2015. The goals made clear that achieving that challenge goal would require a broad, multi-sectoral effort, not the effort of any single organization.

The current analysis, led by Tim Byers, MD, of the University of Colorado, examined trends in cancer mortality across the 25-year challenge period from 1990 to 2015*. The report found:

The report says not fully reaching the goal should be seen as an opportunity. “That the ACS challenge goal to reduce US cancer mortality by 50% over the 25-year period from 1990 to 2015 was only one-half achieved should be seen as a glass half full. This progress should eliminate any historical remnants of cancer fatalism, and it should now stimulate our national imagination about what might be possible to achieve into the future.”

The report says the effort also has a valuable lesson in goal-setting: “The best goals are those that stretch the limits of what might actually be achieved by renewed efforts. There is a sweet spot in goal setting between projecting what will likely happen regardless of renewed efforts (setting the bar too low) and creating unrealistic challenges that tend to paralyze us (setting the bar too high).”

The report concludes: “All sectors of civil society will need to join in efforts to further reduce cancer mortality in the United States, including those focused on the many social determinants of cancer, including income, availability of care, and many other social and environmental factors impacting cancer-reducing policies and programs. How much more progress we will make will depend on the extent to which policy makers and the American public can join together to create systems and incentives to understand cancer better, to reduce several of the known risk factors for cancer, to better diagnose cancer earlier, and to assure that state-of-the-art treatment is available for all.”

To read more about the report, check out this editorial on Medium by Chief Medical Officer Otis W. Brawley, M.D.

I am the director of medical and scientific communications for the American Cancer Society national home office.
View all posts by David Sampson →
This entry was posted in Uncategorized. Bookmark the permalink.