Racing in the Pink Chevy

It was so much fun to watch them get out of the car after the ride, so excited and obviously blown away by the experience. I also got to ride with Team Chevy Driver Jamie McMurray at 130 mph! I must confess, I was a little nauseous after my backseat experience, but it was totally worth it! 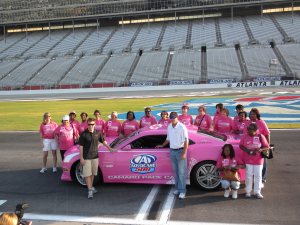 Special thanks to Chevy and the Team Chevy drivers for taking the time out to give our survivors an exciting ride. They had such a wonderful time and felt very special! Here’s a short video from the event:

This entry was posted in Uncategorized. Bookmark the permalink.